Let’s start with the background image. Fill the layer with solid color…

… double click on layer to open its blending options, add gradient (overay) and a bit of inner glow (black, overlay).

To make this background look like a wall, I took the real photo of a wall (taken by me some time ago), turned it to grayscale (Ctrl-Shift-D) and sharpened the wall texture by increasing image contrast.

then I pasted this image to our file and set its blend mode to soft light.

Next, we’ll need a picture in a frame. Let’s start with the frame itself. Create a new layer set, new layer inside it, and draw a dark-red rectangle.

in menu, find select > modify > contract and contract selection by around 20 pixels. 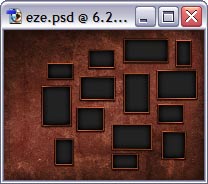 Now simply duplicate this layer set several times and distribute the copies here and there. For each frame, hit Ctrl-T (transform) and rotate but very slightly (not more than 1 degree). 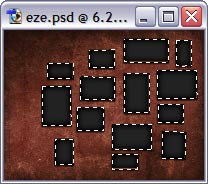 Our frames are empty – we need pictures inside them. My idea is to have one photo sliced into pieces. But before that, I need a single layer which would be “container” for this photo. Select all frames (to do so, click layers one by one holding Ctrl-Shift). 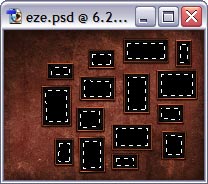 go to menu Select – Modify – Contract, and contract by around 40 pixels. 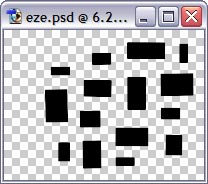 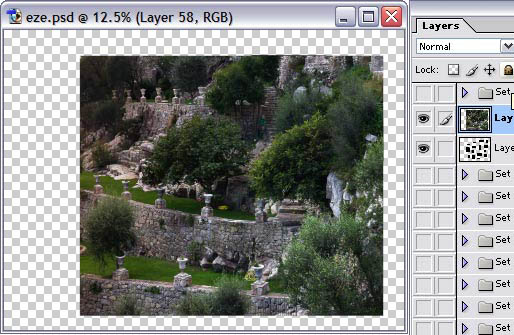 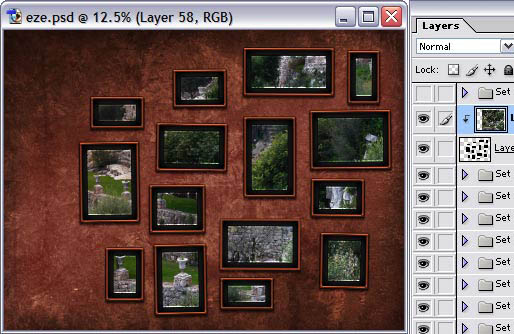 …and then simply hit Ctrl-G to group this layer with previous. Voila!