Next lesson we’ll se how is it possible to work with the colors, change the eyes’ color, make more dynamic the bended grass because of the wind, create an effect of aquarelle blurring, sun rays and shadows in contrast.

Create a new layer, applying Layer ? New ? Layer and then choose the Brush Tool (Hardness must be of 0%) to paint the eyes with a bright color.

Open now a picture demonstrating a high grass and copy it: Edit ? Copy (ctrl+c). Get back to the processed picture’s file, containing the eye, set it out on a new layer: Edit ? Paste (ctrl+v).

Change the layer’s type on Overlay. Copy now again the basic layer, containing the grass and place it on the bottom. Blur it out with the next selection: Filter- Blur ? Gaussian Blur. 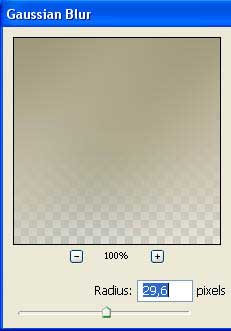 Move a little the blurred part closer to the eye, using Move Tool to hide the irregular grass’ edges. 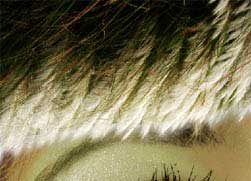 Merge now all three layers, using next command: Layer ? Merge Down (ctrl+e). Copy then the new layer that we’ve got and change a little its color, decolorizing it firstly (Image ? Adjustments ? Desaturate (shift+ctrl+u)). Increase after that the brightness and the contrast: Image ? Adjustments ? Brightness/Contrast

Draw it out now, applying the command Edit ? Transform ? Distort. 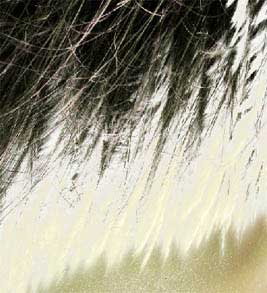 Change the layer’s type on Multiply. 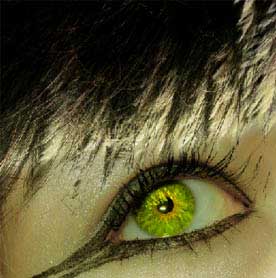 Choose now the Crop Tool to elongate the picture’s size downwards. Enlarge now the skin’s surface under the eye, marking it out with Rectangular Marquee Tool. Copy it now many times, applying: Edit ? Copy (ctrl+c)

Insert on a new layer the picture with the storm – clouds. 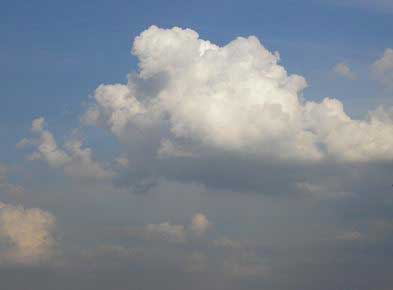 Using Magic Wand Tool, mark out and erase then the sky above the mentioned clouds. Blur out the clouds’ edges with the instrument Blur Tool. 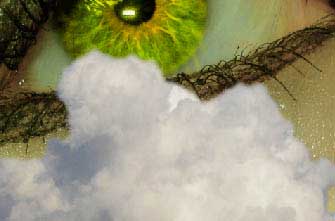 Copy now the layer and make use of Filter ? Blur – Gaussian Blur. Place the copy lower than the clouds’ layer. Merge down these layers.

Give to the sky more texture by inserting one more photo representing the sky. 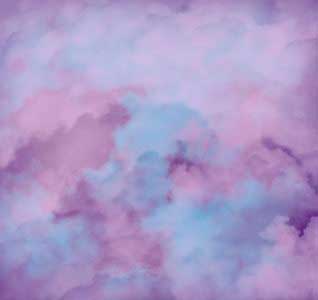 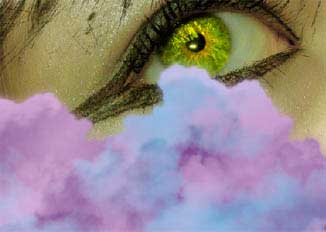 Decolorize the layer now and increase its contrast.

Change the layer’s type on Overlay and combine this layer with that one containing the basic sky. The new layer’s type change on Linear Burn. We’ll get an effect of aquarelle patches. 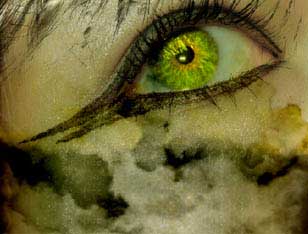 Copy the new made layer and blur it out on the shown direction: Filter ? Blur ? Motion Blur. 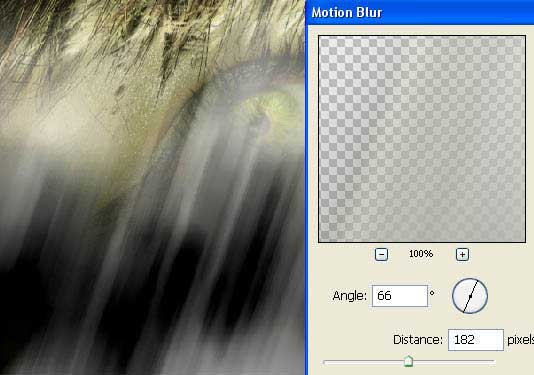 Change again the layer’s type on Overlay. This way we’ll get an effect of having sun’s rays. 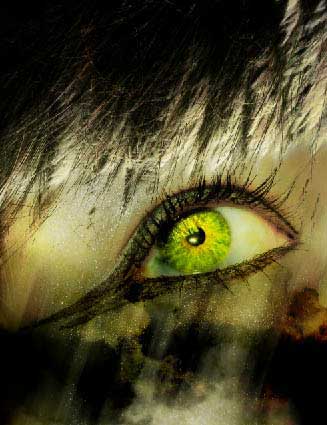 Choose now from the indicated web-address (http://www.deviantart.com/deviation/6521172/
?qo=21&q=clock&qh=in%3Aresources%2Fapplications%2Fpsbrushes+sort%3Atime) a set of ready brushes representing the clock’s pointers and place out two pointers on the eye’s pupil, changing the size and the angle, using Edit ? Free Transform (ctrl+t).

Choose now the Line Tool to represent the figures, picturing them more than usually. 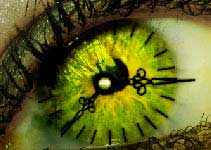 Create a new layer and apply the Text Tool to choose the necessary type El&Font!Brush. Picture now separately as many figures as we have on the clock (in this case we have 18 ). Apply now Edit ? Free Transform to situate them on the eye’s cornea on different angle, but changing the size. 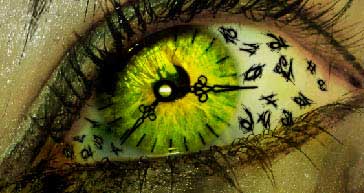 Choose the Crop Tool and Rectangular Tool to represent the frame. 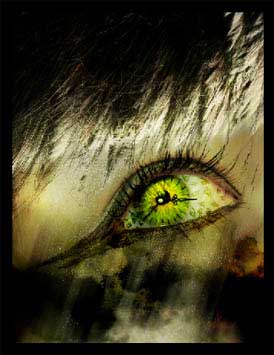 Next add the shadows in contrast, inserting on the upper layer such a picture. 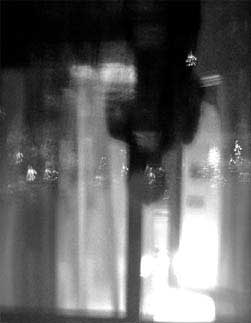 Blur it out with Filter ? Blur ? Motion Blur. Change this layer’s type on Overlay and minimize the Opacity till 50%. The eye must be partly decolorized by applying the Sponge Tool. 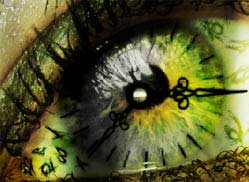 Insert now the pictures of several insects on a new layer. 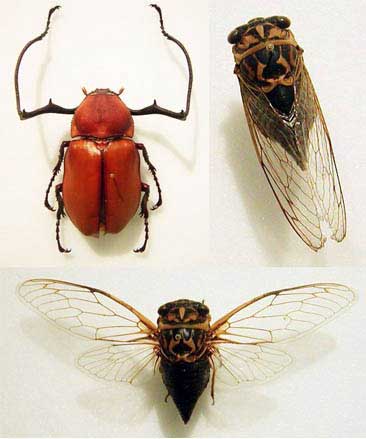 Erase the background, marking it firstly with Polygonal Lasso Tool. 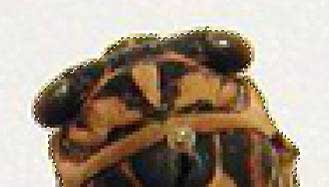 Use the Smudge Tool to paint the tacks on their backs. 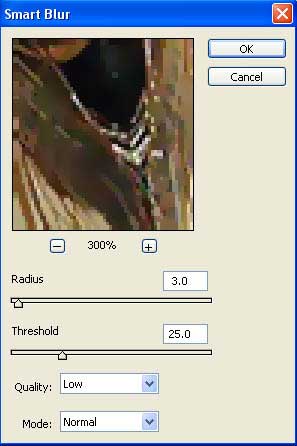 Merge now all the layers containing the insects and copy the new layer. Apply to it Filter ? Blur ? Radial Blur. 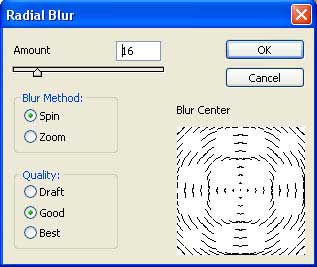 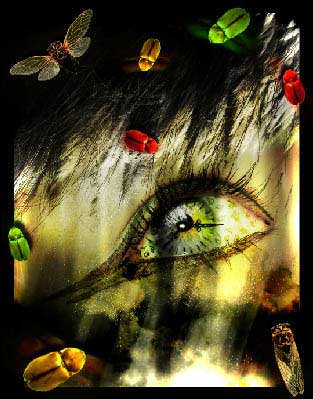 Take the instrument Ellipse Tool and Gaussian Blur filter to add several highlights on the insects. It’s necessary for this to picture on a single layer small circles and than this layer must be copied and blurred out. 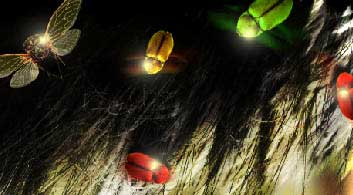 The last feature includes adding the stars. It’s necessary to use a ready brush’s set which may be downloaded here: http://www.deviantart.com/deviation/30000107/ ?qo=20&q=by%3Aanarasha&qh=sort%3Atime+-in%3Ascraps.
The strange night illustration is finished! 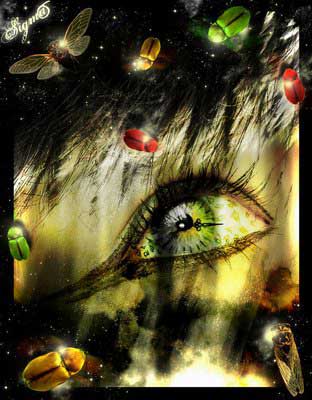