Dreamweaver MX makes things easier by allowing you to organize the components of a Web application – static as well as dynamic – into a single entity called a “site”. In order to begin, create a new site via the Site-> New Site menu and say hello to the wizard that appears.

First up, you need to specify your working directory for the site – the name of the site, the root folder for the files and the default folder to look in for images. These folders may be on your local machine, or on a different machine – Dreamweaver refers to this collection of data as the “local site”. 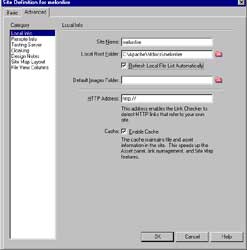 You can also optionally tell Dreamweaver about a “remote site” – this is usually the location where your Web server is running, and where your files will ultimately go for testing and deployment. Dreamweaver allows you to also specify the access mechanism for such a remote site – FTP, LAN, SourceSafe and so on. 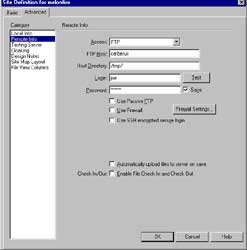 Finally, if you’re developing dynamic pages, you should also specify a “testing server” – this is a folder which can be used by Dreamweaver to process your scripts and dynamically generate documents, either from a database or elsewhere. In an Apache+PHP+MySQL environment, this folder would be the same as the root folder for the application on the Web server. You can also specify a URL prefix, which is used when you try to access the application via a Web browser.

Here’s a list of the values I specified when creating a sample site in
Dreamweaver:

In case you missed something, all this means is that I’ll be doing all my development on my local machine (which has Apache, PHP and MySQL all talking to each other) in the folder “C:Apachehtdocsmelonfire”, and will also be uploading copies of the files to a remote server named “cerberus” via FTP